High personnel costs and wage rates are especially high in developed countries, making automation the key focus in the manufacturing and logistics sectors. Growth in e-commerce is the main driver for AGV/AMR demand in warehouse automation. Major e-commerce companies have increased their acquisitions of robots to boost their warehouse operations.

Advancements in mobile technology and Artificial Intelligence are already revolutionizing how industries operate. For example, rightPick robot that was launched in 2017 is able to pick items at a rate of 500 to 600 per hour, at par with a human worker. This kind of technological advancement will further accelerate the growth of the mobile robots market.

Many other factors play a key role in the growth of the market. Many emerging countries are now more willing to justify the cost of mobile robot installations as they are proven to improve the speed and quality of production. Increasing governmental initiatives in funding and research in robotics will also further fuel the market.

Key Market Trends and Drivers Attributing to Growth Include:

The Asia Pacific Region and Japan to Grow Fastest 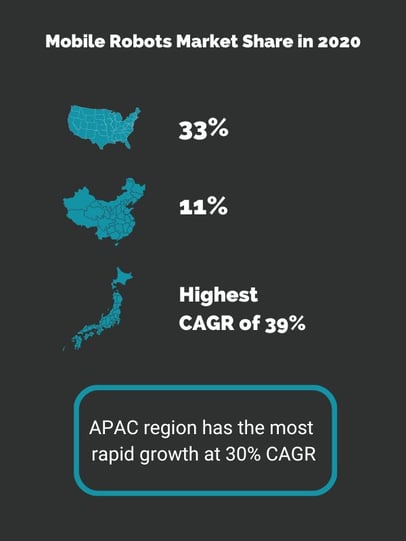 The United States and China are the driving force in the mobile robot market. US is currently leading globally with a market value of 3.5 billion USD in 2020, about 33% of the total market shares. The significant presence of key market players in this country boosts the market’s growth. Companies like Northrop Grumman, Lockheed Martin, Amazon Robotics, and General Dynamics Mission Systems have their headquarters located in the US.

The Chinese e-commerce industry, like Alibaba, has driven the mobile robot market in China. China’s market value was estimated to be around 1,2 billion USD, but this number is expected to soar to almost 20 million USD in 2030, increasing China’s share of the market from 11% to 27%. However, Japan is the fastest-growing market, both globally and regionally in the APAC region, with a CAGR of 39%. Other countries in Asia, such as India, Singapore, and South Korea, are also showing incredible growth rates making APAC the fastest growing region in the market.

Mobile robots’ applications span on a broad spectrum of industries such as logistics, education, entertainment, healthcare, domestics, agriculture, and even the military. The logistics segment takes up the largest share (26%) of the market. The use of mobile automated guided vehicles (AGVs) is prominent in this sector to transport goods around warehouses and storage facilities.

The domestics segment is expected to grow with the highest CAGR of 24.0%. The robots used in this sector are service robots mainly used for household chores. Robots currently available in this segment are, for example, floor cleaners, lawn mowers, swimming pool cleaners, gutter cleaning robots, and telepresence robots.

What is Mobile Robot?

A mobile robot is a robot capable of moving from one place to another. They are used to transfer materials in factory settings relieving employees from burdensome and time-consuming tasks.

Automated Guided Vehicle (AGV) and Automated Mobile Robot (AMR) are usually mentioned when talking about mobile robots. Both technologies are common fixtures in big factories and warehouses. They both can accomplish similar tasks, which is moving materials around. However, there are apparent differences between the two.

Some people think of AGV as the predecessor of mobile robots, and it has been used in industrial settings since the 1950s.

AGV operates on a fixed route relying on guidance devices such as wire, magnetic tape, laser path, or reflective markers. Changing or adding the routes of AGV can be complex and costly as it would mean changing the infrastructure. The installation will also take more time since the infrastructure needs to be provided before AGV can operate.

AGV is considered to have basic, simple technology. It can detect obstacles but has no ability to change its course of action. As a result, AGV may become “stuck” when they come across an object along its path. This often requires the help of an operator to move the object and restart the AGV again.

AMR is the newer, smarter, and more expensive technology compared to AGV. It is equipped with an autonomous navigation system within its software. They can overcome obstacles as they can remap and define a new destination.

Although AMR is more expensive than AGV, its installation is fast, easy, and cost-effective. In addition, it offers greater flexibility as it can work in different locations, not bound by any fixed infrastructure. In fact, AMR can also be used outside of a building and has a “follow me” application that can be used to follow humans around while carrying loads of material.

If you want to know more about the robotics market and different applications, check out this article.