Businesses have once again placed a top priority on costs, efficiency, and resilience because of the current uncertain situation that leads to labor shortages, inflation, and a recession. Through automation, organizations can achieve greater efficiency in multiple areas. Businesses that previously showed resistance finally turned to automation during the Covid-19 pandemic to cope with the sudden shrinking of labor forces.

Market Research Future estimated the value of the factory automation market to be around USD 125.3 billion in 2021. The company forecasted the market to grow to USD 281.9 billion by 2030, registering a CAGR of 5.1% during the forecast period 2022-2030.

The trend of automation is long-term. The world is facing a major demographic shift which leads to a stagnant or declining growth of the labor force. Three historical momentums that boosted the size of available labor have already faced their end of time, namely: the coming of age of the baby boomer generation, women's entry into the workforce, and the integration of China and India into the global economy. With a slow global birth rate and a growing aging population, the era of plentiful labor is over. 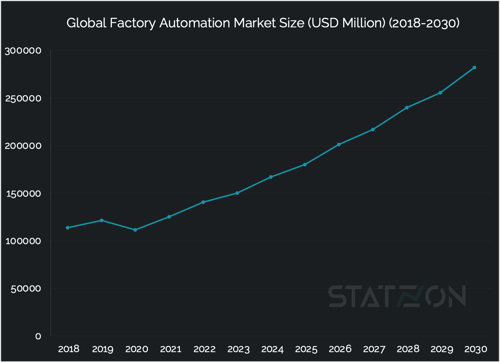 Despite the relatively larger labor force compared to other regions, Asia-Pacific is dominating the market with a 43% share in 2021. Automation brings forth speed and accuracy beyond human capability. The region contributed USD 53.8 billion to the total market and is growing at 9.7% CAGR, the highest CAGR among other regions.

China and India are the fastest-growing economies in Asia-Pacific. Manufacturing automation has been growing well in these two countries during the last decade. Though the Chinese manufacturing industry has been hit hard due to the prolonged lockdowns, it is still doing relatively well when compared to the global manufacturing economy. The projection for the next few years is showing growth. Taiwan, Thailand, and Indonesia are emerging markets that are on the brink of an industrialization boom that will encourage the factory automation market to grow further.

Europe is the second largest market regulating 29% of the market. The region accounted for USD 35.8 billion of the total market value in 2021. Growing demand for processed food in the food processing industry has been positively impacting the factory automation market in this region. Germany and the UK are the highest contributors to the European market thanks to several automotive and aerospace companies located in these two countries, such as ABB, Schneider Electric, and Siemens.

By type of factory automation

Based on the type of automation, Market Research Future described the market using four different segments, in which the Fixed Automation segment is dominating the market with a 39% market share. High initial investment and high production rates characterize this form of automation. It is, therefore, suitable for products that are made in large volumes.

The second most favorable type of automation is Flexible Automation. This segment gained a 28% share of the market in 2021. This type of automation is designed to quickly adapt and respond to product changes in terms of quantity and type. It is suitable for companies delivering batches of different products with low-to-medium output.

Fixed automation and flexible automation segments combined regulate 67% of the total market, with each segment valued at USD 48.9 billion and USD 34.8 billion in 2021, respectively.

The other two segments with smaller market shares are Programmable Automation (20%) and Integrated Automation (12.5%). 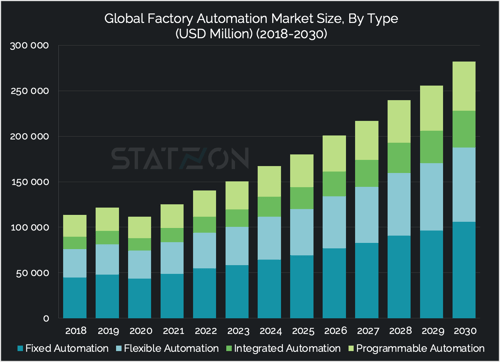 Excluding the Other segment, SCADA is the biggest segment in the market, contributing USD 28.1 billion in 2021. The growing adoption of Industry 4.0 by many industries has been driving the SCADA market to grow. 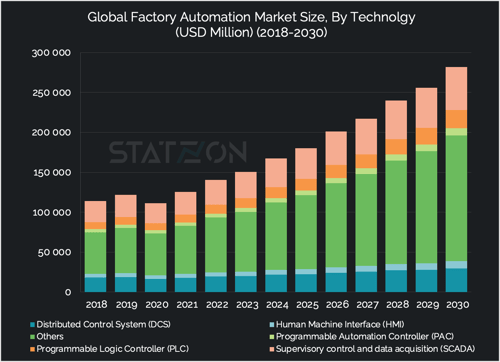 Some of the key players in the market offering automation solutions are ABB,  Schneider Electric, Siemens, Mitsubishi Electric Corporation, and Rockwell Automation, among many others.