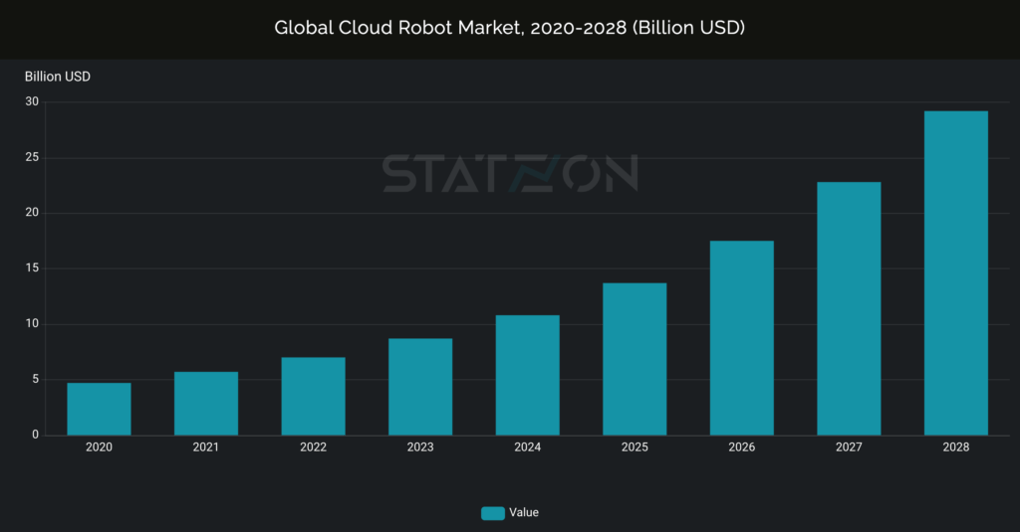 The increasing demand for automation in many industries has led to the increased adoption of robotics systems. This trend is also followed by increased usage of smart devices, a rising number of cloud streaming services, and the evolution of bandwidth that contribute to the expanse of the cloud robotics market. The global market value for cloud robotics  is estimated at 4.7 billion USD in 2020. This number is projected to reach 29.2 billion USD by 2028, growing at a CAGR of 25.8%.

Cost-effectiveness, low infrastructure requirement, and enhanced process efficiency using cloud robotics are other key factors that encourage businesses to embrace this emerging technology rapidly. Innovations and solutions in the cloud robotics sphere are also expected to rise as companies are willing to invest in the robotics market.

The United States leads in market share, and Brazil is to witness significant growth

North America, Europe, and the Asia Pacific are currently the key segments in the global cloud robotics market. The North American region emerged as the market leader, with the United States alone controlling 33% of the global market share. The Asia Pacific, however, will be growing at the highest CAGR of 28.5% over the forecast period 2020-2028, with China and Japan as the most lucrative markets.

Emerging markets are catching up as demand for cloud robotics is rising in countries like Mexico, India, Saudi Arabia, and South Korea. Brazil is currently the fastest-growing market registering a 44% CAGR.

Users of cloud robotics technology are categorized into three different segments: industrial, commercial, and consumer. The industrial segment is currently the largest market segment, taking up 41% of the market share. This segment is also expected to grow with a CAGR of 26.3% over the forecast period. The manufacturing sector is the biggest push for this market segment, followed by the automotive and logistics sectors.

The market is segmented into private cloud, public cloud, and hybrid cloud based on deployment type. The public cloud is easy to install and relatively affordable, making it the dominant deployment segment with a 47% market share. However, the private cloud sub-segment shows promising growth with a CAGR of 26%.

PaaS is highly available, simple, and cost-effective. It is currently the most popular cloud service in the market, taking up around 43% of the total market share. SaaS is the second most demanded type of cloud computing service. It has 41% of the market share, very popular among online retailers. Lastly, IaaS contributes 16% of shares to the cloud robotics market.

The large market share in North America can be attributed to the fact that many of the major players in the cloud robotics market are based in the region. Amazon Robotics, Google, IBM, Microsoft, and C2RO are some of the biggest cloud robotics companies in North America and globally. Alibaba is the leading cloud computing service in China. With China’s thriving e-commerce environment, the growth of Alibaba’s cloud business outpaced Amazon and Microsoft in 2020. Huawei and Tencent are Alibaba’s two biggest rivals in China.

Other big names in the market include the major players in the general robotics industry, such as “The Big 4” companies: ABB, KUKA, Fanuc, and Yaskawa. Rising numbers of start-ups are also seen to specialize in cloud robotics offering new and innovative technology. Some start-ups to watch for are Graphcore, INVOLI, Aitomation, Salty Cloud, and Soar Robotics among many others.

Cloud Robotics – What is it?

Cloud Robotics is a term first coined by Jeff Kufner when he still worked for Google in 2010. The idea is to merge robotics and cloud technology to enable a remote brain for robots. This remote brain will give robots a greater memory, computational power, collective learning, and interconnectivity. As robots are relying on the cloud for resources, instead of on-board computational systems, robots will be getting smarter, smaller, and cheaper.